Gamechain is a vertical public chain in the game field. It adheres to the original intention of helping small and medium-sized game developers quickly access the blockchain system. GC services will cover the whole ecosystem of the game industry. In 2020, the global game industry's income from consumers will reach 159.3 billion U.S. dollars. GC token will serve as an ecological bridge to provide a more transparent and fair game environment, a more reasonable and competitive incentive system, and help game developers quickly access the market, so as to maximize the game landing of the blockchain industry. Gamechain will be officially launched on September 8, 2020. 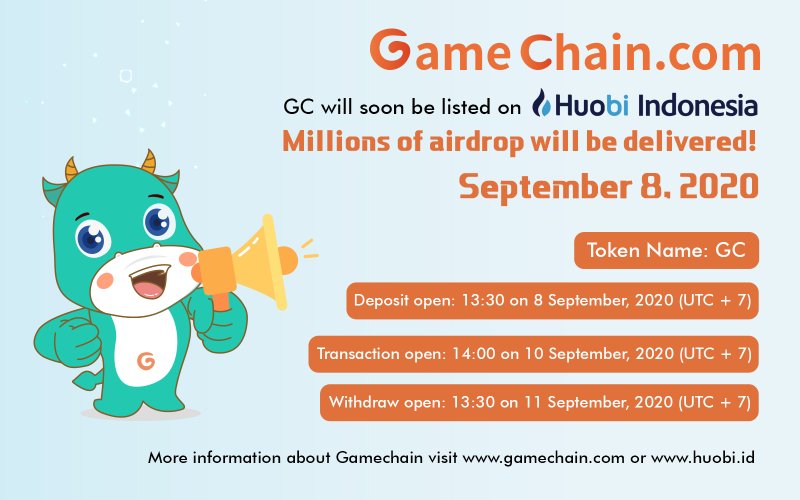 Huobi Indonesia will soon open the deposite and withdrawal channel of GC.

The specific times and details is as follows:

GameChain is a vertical public chain in the gaming field based on peer-to-peer blockchain technology, which covering the entire ecology of the gaming industry, by using the GC token as a ecological bridge, providing more transparent and fair gaming enviroment.with more reasonable and competitive incentive system, to helping the gaming development business easy and faster to access into the blockchain system to maximize the landing of blockchain gaming.

It use the BPoS-PBFT consensus mechanism to achieve the best balance of blockchain performance and security, also using the main chain-parallel sub-chain architecture to allow each gamer to quickly deploy a sub-chain that matches its own digital assets inside to complete the globa flow through transaction chain.

GameChain has been deely involved into the global gaming market, It has reached in-depth cooperation with 16169.com, the blockchain gaming distribution platform.Guess one blockchain gaming platform with the Indonesia's well-known local gaming team and will become the first and ever batch of nodes in GameChain